This chapter defines the CAN bus based transport layer of DroneCAN.

The concept of transfer

Both message and service transfers can be further distinguished between:

The following properties are common to all types of transfer:

In order to broadcast a message, the broadcasting node must have a node ID that is unique within the network. An exception is applied to anonymous message broadcasts.

An anonymous message is a transfer that originates from a node that does not have a node ID. This sort of message transfer is useful for dynamic node ID allocation (a high-level concept that will be explained in the chapter 6 of the specification).

A node that does not have a node ID is said to be in passive mode.

An anonymous message has the same properties as a regular message, except for source node ID.

An anonymous transfer can only be a single-frame transfer. Multi-frame anonymous messages are not allowed.

Note that anonymous messages require specific arbitration rules and have restrictions on the acceptable data type ID values. The details are explained in the following chapters.

Message transmission should be aborted if it cannot be completed in 1 second.

A service request transfer has the following properties:

A service response transfer has the following properties:

Both client and server must have node ID values that are unique within the network.

The following timings should be used, unless the application strongly requires different values:

If different values are used, they must be explicitly documented.

The Transfer ID is a small unsigned integer value that is added to every outgoing transfer (it is used by receiving nodes to distinguish between individual transfers).

Every node that needs to publish a transfer must maintain the mapping from transfer descriptors to transfer ID. This mapping is referred to as the transfer ID map.

Whenever a node needs to emit a transfer, it will query its transfer ID map for the appropriate transfer descriptor. If the map does not contain such entry, a new entry will be created with transfer ID initialized to zero. The node will use the current value of transfer ID from the map for the transfer, and then the value stored in the map will be incremented by one. When the stored transfer ID exceeds its maximum value, it will roll over to zero.

It is expected that some nodes will need to publish certain transfers aperiodically or on an ad-hoc basis, thereby creating unused entries in the transfer ID map. In order to avoid keeping unused entries in the map, the nodes are allowed, but not required, to remove entries from the map that were not used for at least 2 seconds. Therefore, it is possible that a node may publish a transfer with an out-of-order transfer ID value, if previous transfer of the same descriptor has been published more than 2 seconds previously.

If the size of the entire transfer payload does not exceed the space available for payload in a single CAN frame, the whole transfer will be contained in one CAN frame. Such transfer is called a single-frame transfer.

Single frame transfers are more efficient than multi-frame transfers in terms of throughput and latency, therefore it is advised to avoid the latter where possible.

Multi-frame transfers are used when the size of the transfer payload exceeds the space available for payload in a single CAN frame.

Two new concepts are introduced in the context of multi-frame transfers, both of which are reviewed below in detail:

All frames of a multi-frame transfer should be pushed to the bus at once, in the proper order from the first frame to the last frame.

The Transfer CRC is computed from the transfer payload, prepended with a data type signature, in little-endian byte order. The diagram below illustrates the input of the transfer CRC function:

The transfer CRC algorithm is specified as follows:

The following code provides an implementation of the transfer CRC algorithm in C++:

The Toggle bit is a property defined at the CAN frame level. Its purpose is to detect and avoid CAN frame duplication errors.

In configurations with redundant CAN bus interfaces, nodes are required to transmit every outgoing transfer via all available redundant interfaces simultaneously.

An exception to the above rule is applicable if the payload of the transfer depends on some properties of the interface through which the transfer is emitted. An example of such a special case is the time-synchronization algorithm leveraged by DroneCAN (documented in the chapter 6 of the specification). 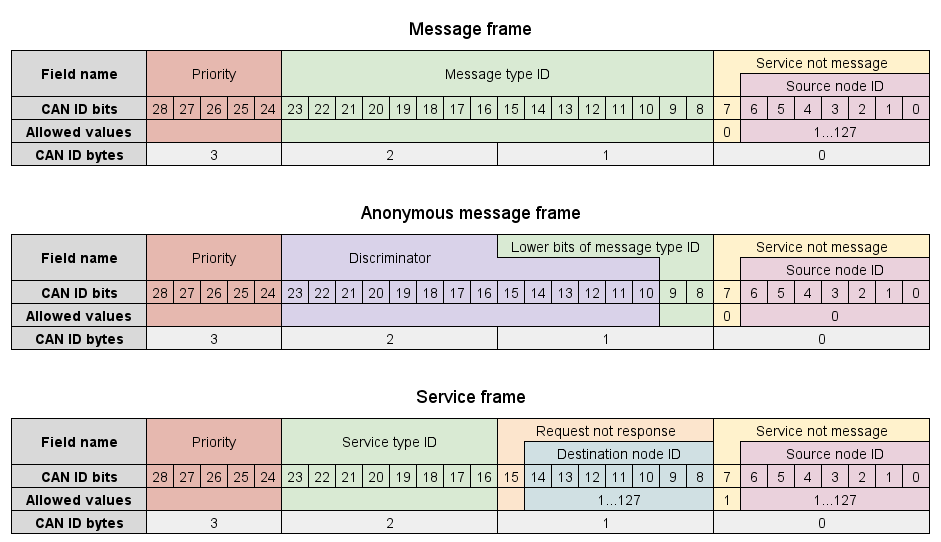 Contents of the CAN ID field depend on the transfer type.

In the case of a message broadcast transfer, the CAN ID field of every frame of the transfer will contain the following fields:

In the case of an anonymous message transfer, the CAN ID will contain the following fields:

In the case of a service transfer, the CAN ID field of every frame of the transfer will contain the following fields:

In multi-frame transfers, the value of the priority field must be identical for all frames of the transfer.

Valid values of message type ID range from 0 to 65535, inclusively.

Valid values of message type ID range for anonymous message transfers range from 0 to 3, inclusively. This limitation is due to the fact that only 2 lower bits of the message type ID are available in this case.

Valid values of service type ID range from 0 to 255, inclusively.

Valid values of Node ID range from 1 to 127, inclusively.

Note that Node ID is represented by a 7-bit unsigned integer value and that zero is reserved, to represent either an unknown node or all nodes, depending on the context.

CAN bus does not allow different nodes to transmit CAN frames with different data field values under the same CAN ID. Owing to the fact that the CAN ID field includes the node ID value of the transmitting node, this restriction is met by regular DroneCAN transfers. However, anonymous message transfers violate this restriction, because they all share the same node ID of zero.

In order to work-around this problem, DroneCAN adds a discriminator to the CAN ID field of anonymous message transfers, and defines special logic for handling CAN bus errors during transmission of anonymous frames.

Since the discriminator is only 14 bits long, the probability of having multiple nodes that are emitting CAN frames with the same CAN ID but different data is higher than 0.006% (which is significant). Therefore, the protocol must account for possible errors on the CAN bus triggered by CAN ID collisions. In order to comply with this requirement, DroneCAN requires all nodes to immediately abort transmission of all anonymous transfers once an error on the CAN bus is detected. This measure allows to prevent the bus deadlock that may occur if the automatic retransmission on bus error is not suppressed.

The Data field of the CAN frame is shared between the following fields:

The tail byte contains the following fields, starting from the most significant bit:

The following figure summarizes the data field format for a single-frame transfer:

The following figure summarizes the data field format for a multi-frame transfer: 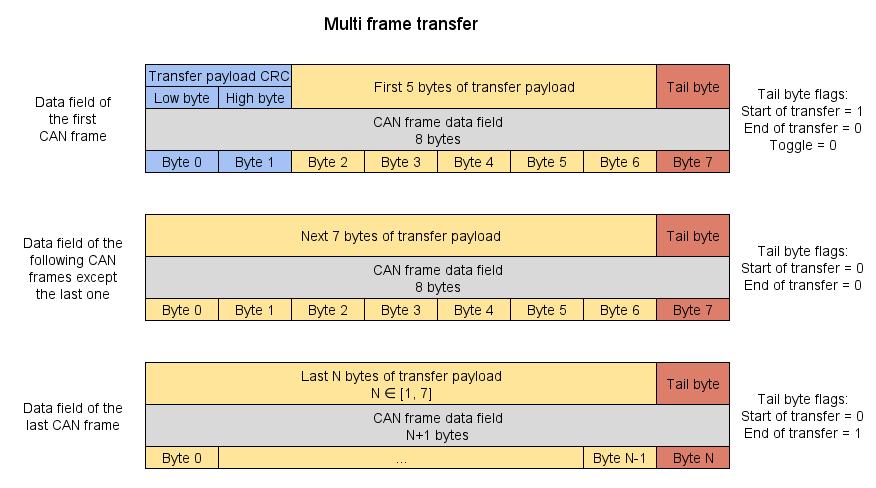 For single-frame transfers, the value of this field is always 1.

For multi-frame transfers, the value of this field is 1 if the current frame is the first frame of the transfer, and 0 otherwise.

For single-frame transfers, the value of this field is always 1.

For multi-frame transfers, the value of this field is 1 if the current frame is the last frame of the transfer, and 0 otherwise.

For single-frame transfers, the value of this field is always 0.

For multi-frame transfers, this field contains the value of the toggle bit. As specified above this will alternate value between frames, starting at 0 for the first frame.

This field contains the transfer ID value of the current transfer (for all types of transfers).

The value is 5 bits wide, therefore the allowed values range from 0 to 31, inclusively.

The following code sample provides an implementation of the transfer ID comparison algorithm in C++:

Half range of transfer ID is 16.

The receiver state should include at least the following variables:

The following operations are defined for the receiver state:

The following conditions are defined for the receiver state:

Whenever a node receives a transfer, it will query its receiver map for the matching transfer descriptor. If the matching state does not exist, the node will add a new uninitialized receiver state to the map. The node then will proceed with the procedure of receiver state update, which is defined below.

It is expected that some transfers will be aperiodic or ad-hoc, which implies that the receiver map may accumulate receiver states that are no longer used over time. Therefore, nodes are allowed, but not required, to remove any receiver state from the receiver map, once the state reaches the transfer ID timeout condition.

Receiver state can only be modified when a new CAN frame of a matching transfer is received. This guarantee simplifies implementation, as it implies that the receiver states will not require any background maintenance processes.

The following pseudocode demonstrates the transfer reception process for a configuration with redundant CAN bus interfaces.

The following pseudocode demonstrates the transfer reception process for a configuration with a non-redundant CAN bus interface.

The chapter dedicated to hardware design recommendations contains important information concerning CAN bus bit rate, connectors, and other properties of the physical layer of the protocol.

Multi-frame transfers use identical CAN ID for all frames of the transfer, and DroneCAN requires that all frames of a multi-frame transfer should be transmitted in order. Therefore, the CAN controller driver software must ensure that CAN frames with identical CAN ID must be transmitted in their order of appearance in the TX queue. Some hardware will not meet this requirement by default, so the designer must take special care to ensure correct behavior, and apply workarounds if necessary.

This work is licensed under a Creative Commons Attribution 4.0 International License.
Much of the content of this site is based upon prior work by Pavel Kirienko and the UAVCAN Development Team.