The valid range for message type ID is from 0 to 65535, inclusive (see CAN bus transport layer specification). The range is segmented as follows:

The valid range for service type ID is from 0 to 255, inclusive (see CAN bus transport layer specification). The range is segmented as follows:

The valid range for node ID is from 1 to 127, inclusive (see CAN bus transport layer specification).

The values 126 and 127 are reserved for debugging tools and should not be used for real nodes. 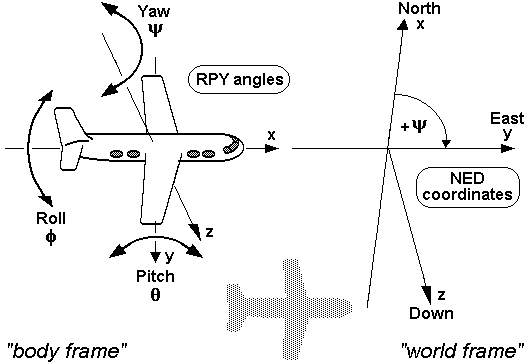 DroneCAN follows the conventions that are widely accepted in various aerospace applications.

All systems are right handed. In relation to a body, the standard is as follows:

In the case of cameras, the following convention should be preferred:

For world frames, the North-East-Down (NED) notation should be preferred.

The default rotation representation is quaternion. The coefficients are ordered as follows: X, Y, Z, W.

Angular velocities should be represented in fixed axis roll (about X), pitch (about Y), and yaw (about Z).

Matrices should be represented as flat arrays in row-major order. There are some standard ways to represent an N-by-N square matrix in a one-dimensional array:

Positive infinity in variance means that the associated value is undefined. Alternatively, in some cases, the value itself can be set to NAN (not-a-number float constant) to indicate that the parameter value is not defined. Note though that it is recommended to avoid NAN and infinities whenever possible for portability reasons.

All units are SI units, unless explicitly noted otherwise.

If an application designer chooses to deviate, such decision should be properly documented.

This work is licensed under a Creative Commons Attribution 4.0 International License.
Much of the content of this site is based upon prior work by Pavel Kirienko and the UAVCAN Development Team.